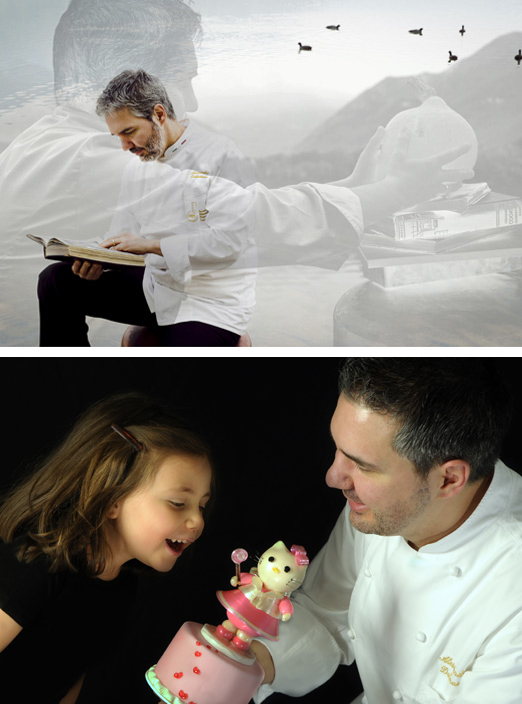 He was brought up in a professional environment; his father, Giuseppe Dalmasso, has been the owner of the Pasticceria Dalmasso in Almese, Turin since 1963.

In 1987, at the age of 15, he gained a certificate in Baking and the Confectionary Industry from the technical state school in Turin. After his first specialization course in 1988 in Turin with the master, Guido Bellissima, he completed various other specialized courses. Since 1990 he has participated in numerous national and international competitions and between 1994 and 1997 he took part in a painting course at the atelier of the artist Vinicio Perugia.

In 1991, he represented Italy at the Junior competition of the Grand Prix de la Pâtisserie in Lyon, achieving an excellent international result at only 17 years of age.
In 1992 he won the first national junior prize “Easter in chocolate” at the International Exhibition for the Artisan Production of Gelato, Pastry, Confectionary and Bakery (SIGEP) in Rimini.
In 1994 he won the selection process for the national junior pastry chef team at the International Confectionary Exhibition (MIAD) in Milan.
In 1995 he took part in the Junior World Championships in Tokyo, gaining an excellent result.
A long break followed in which he focused his attention on opening his own patisserie in Avigliana at the young age of 23.
In 2006 he became part of the prestigious Italian Academy of Master Pastry Chefs (AMPI).
In 2008 he won the selection process for Club Italia for the Coupe du Monde de la Pâtisserie at the SIGEP in Rimini.
In 2009 he won the Silver Medal at the most prestigious international pastry competition: La Coupe du Monde de la Pâtisserie.
In 2009 he won a gold medal with the Ninsola cake at the symposium of the Italian Academy of Master Pastry Chefs.
In 2010 he was a guest speaker at the World Pastry Forum in Phoenix (Arizona, USA) giving a course on “Italian gelato and sorbetto”.

Working alongside the President of Club Italia, in 2011 he trained the team which took part in the Pastry World Cup in Lyon, contributing to Club Italia's success in winning their second silver medal in a row.

In 2011/2012 he was voted “Pastry Chef of the Year” and awarded the Pavoni Trophy from the Italian Academy of Master Pastry Chefs at the Regio Theatre in Parma.
In 2012 he was elected technical director of the Italian section of the Club Coupe du Monde.
In 2013 he trained the Italian team which took part in the Coupe du Monde, winning the bronze medal.
In 2015 he contributed - as technical director of Club Italia - to the Italian team’s success in winning the gold medal.
In 2016 Alessandro Dalmasso became the new President of the Club Coupe Du Monde de la Pâtisserie for the Italian section, taking over from the Master Pastry Chef Gino Fabbri.

Alessandro's philosophy is:
"Making high quality in patisserie. Each single product is made with meticulous attention to detail at every stage of its creation.
For me, quality is the union of personally-selected raw materials, technical skills, study, continual research and endless passion for my work.
The flavour which comes from my products has to be a sweet, unforgettable memory."